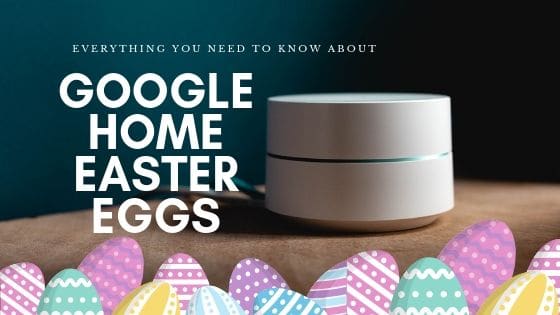 I wasn’t always the biggest fan of Google Home, so the last thing cared about was Google Home Easter Eggs. Especially when they first came out into the market. But in the last year, particularly the Google Home and Google Assistant devices have become a staple in our smart home. Especially using the Google Nest Hub lately in the kitchen for recipes.

For a smart assistant, they have the best natural language processing out there and are usually the most accurate in understanding your questions and commands. If you are one of those people who has picked the Google Home ecosystem to use in your home then there are some really fun things that you can do with your Google Home that need to know about.

You might have heard about Alexa Easter Eggs, but did you know that you can have a lot of fun with Google Assistant easter eggs as well? Of course, Google Home wouldn’t be left in the dust by Amazon.

You can easily find out some hints into some of the Google Home Easter eggs tby asking “Hey Google, What Easter Eggs do you have?”.

Want to know the Best Smart Plugs for Google Home?
Check out this article where we’ve done all the research for you!

What Are the Best Google Home Easter eggs?

It’s hard to say which ones are the best, I’m a geek so my favourites are the Star Wars Easter eggs (especially the one about the storm trooper!). Everyones different though, so I’m just going to give you a complete list of every Google Home Easter Egg out there in 2022. These include pop culture references, quotes, movies, music and much much more.

For everything music related just ask Google assistant the following (you can use “Hey Google as well!). You could get her to sing happy birthday to you or find out who the real slim shady is (finally!).

Does Your Google Home Randomly Talk By Itself Sometimes?
Check out this article where we explain what is going on!

Want to lift the mood in your house? Why not ask Google assistant for some Jokes? Try the following:

OK Google, To be or not to be? – Shakespeare
OK Google, What are the three laws of robotics? – Isaac Asimov
OK Google, What is the answer to life, the universe, and everything? – The Hitchhiker’s Guide to the Galaxy
OK Google, Where’s Waldo?

OK Google, Are we in the Matrix?

OK Google, Do you speak Klingon?
Hey Google, Beam me up.

OK Google, Do you want to build a snowman? – Frozen
OK Google, Elementary my dear Watson. – Sherlock Holmes
OK Google, Who is the fairest of them all?

Back To The Future

Lord of the Rings

Hey Google, Are you my precious?

Want to know how to make your smart speaker portable?
Check out this article that shows you exactly how to do it!

Ok so these are a little out there but these Easter eggs are a lot of fun. Try asking Google assistant the following pop culture questions and see what she has to say!

Want to know how Google assistant really thinks? Try these Easter eggs out to learn a bit more about your friendly little smart speaker! The barrel roll is my favourite from this list!

If you’re feeling a bit bored these games are actually really fun!

If you love games you might also like ‘Know’ – it’s a board game that uses Google Assistant, so the answers are always up to the minute. It comes up with some funny things to guess the answers before the time runs out.

This is always a big hit in our house, especially at Christmas! Some sample questions would be – What time is it now in Moscow? How many days until the World Cup?

Are you a TV addict? Sorry Google assistant won’t help with quitting this habit, but these TV related easter eggs are a lot of fun!

These are all the Google assistant easter eggs that don’t quite fit anywhere else, enjoy!

So that’s a wrap! That’s all of the most popular Google assistant Easter eggs out there at the moment. You can ask Google Assistant a LOT of funny things about everything from Pop culture to Star Trek or Star Wars and everything in between! She can even speak Klingon!

Which is the Best Google Home Easter egg to try out in your smart home? I’ll let you decide!

Check back regularly to find more easter eggs as I regularly update this article.